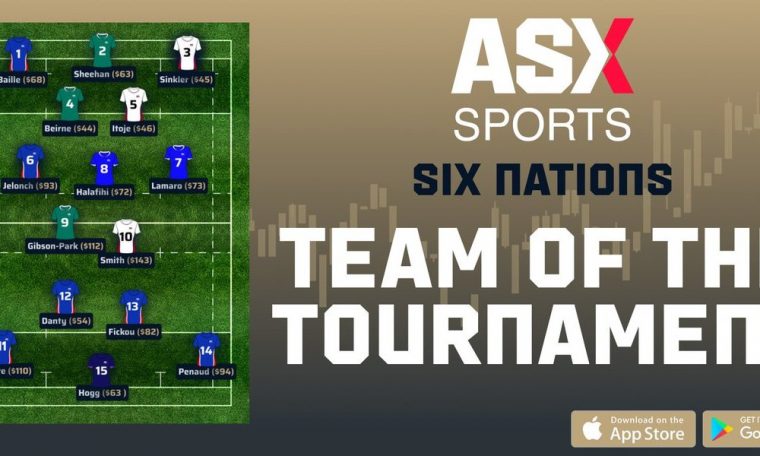 Leading virtual sports exchange unpacks the real winners and losers at the Six Nations; revealing exceptional Antoine Dupont was not even the best scrumhalf in the tournament

You don’t need a weatherman to know which way the wind blows, but ASX Sports’ Fantasy Rugby results certainly sharpen any analysis and shine a light on the real stars of the Six Nations, pricking a few “bubble” reputations along the way.

Antoine Dupont has again earned himself plaudits left, right and centre for his exceptional performances throughout France’s Grand Slam Six Nations campaign, captaining Les Blues to their first title since 2010 – and it’s certainly hard to argue with any of the praise heaped on the 25-year-old wonder.

Since the competition’s final round, Dupont has been named one of three players – alongside Gregory Alldritt and Josh van der Flier – contending for the official title of the Six Nations Player of the Championship and while it would take a brave man to bet against Le Ministre de L’Interieur taking home the gong for a second time following his triumph in 2020, it’s worth noting that at least from a statistical point of view, Dupont wasn’t the best performing scrumhalf in the competition, let alone the best player.

With the Six Nations coming to an end over the weekend, so too has the inaugural competition of ASX Sports’ Fantasy Rugby. From Round 1, powered by data from Rugby Analytics. Users have been able to invest in the players they think will produce the most dividends (or points) in any given match and, while there were always going to be a few obvious standouts throughout the five rounds of action, some of the top performers may come as a surprise to even the most astute of investors.

Five of the six competing nations are represented in the ASX Sport Fantasy Rugby Six Nations Team of the Tournament with the title-winners boasting five inclusions in the chosen XV – which is based entirely on dividends earned throughout the competition.

Tadhg Beirne and Maro Itoje have claimed top honours in the second row but it’s an all-continental affair in the loosies with Anthony Jelonch the top-performing No 6 and the Italian duo of Michele Lamaro and Toa Halafihi rounding out the forwards.

Despite Dupont’s heroics throughout the tournament, he has narrowly missed out to Ireland’s Jamison Gibson-Park as the top scrumhalf of the competition. Gibson-Park’s $112 worth of dividends earned over his five matches in the No 9 jersey placed him as the second-best performing player overall while Dupont ($98) and Scotland’s Ali Price ($85) both found themselves in the top 10 players overall.

The top performer throughout the competition has also unsurprisingly landed himself a spot in the Team of the Tournament in the No 10 jersey: England’s Marcus Smith. Smith raked in a mammoth $143 worth of dividends putting him well clear of the second-place Gibson-Park. With England scoring just eight tries in their five games, the boot of Smith was a crucial points-earner for Eddie Jones’ men – and that’s reflected in his massive takings for the competition.

There were plenty of strong performers in the midfield this year but it’s the French pairing of Jonathan Danty and Gael Fickou who excelled. While inside centres struggled to record points (Danty’s $54 fell well short of the top 20 performers), there was huge competition at No 13 with Fickou narrowly pipping Owen Watkin and Garry Ringrose, while Josh Adams’ appearance at outside centre against Ireland also made him eligible for the Team of the Tournament in that position.

Unsurprisingly, the outside backs were the best-performing group thanks to their penchant for accumulating line breaks, beaten defenders and tries. Gabin Villiere’s always impressive showings earned him the left wing spot as well as the third-best player overall while it’s his French teammate Damian Penaud who has claimed the right wing, and fifth place overall. At fullback, Scotland captain Stuart Hogg has taken out the honours.

Despite Wales’ not managing any spots in the XV, they can at least take solace in the fact that Watkin and Adams managed appearances in the top 20 players but it shouldn’t come as a shock that it’s the champion French who boast the most players in that group, thanks to their six men in the Team of the Tournament coupled with Gregory Alldritt narrowly missing out to Halafihi at number 8.

While the Six Nations may be over for another year, there are plenty of competitions to keep savvy investors interested in the weeks and months ahead. The ASX Sports Super Rugby Pacific fantasy competition is well and truly up and running for those with an interest in the Southern Hemisphere while there will be more opportunities to look forward to as the year progresses.