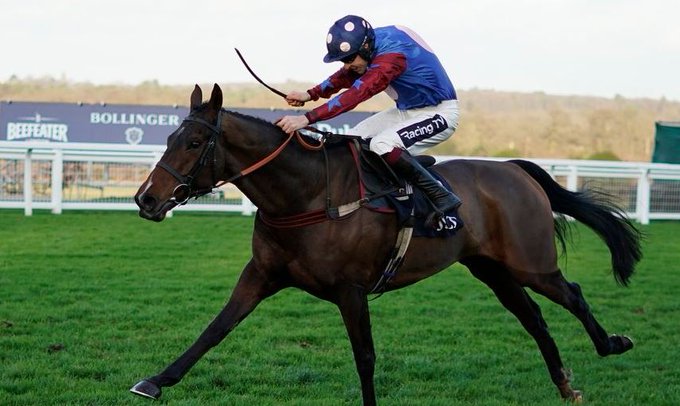 Sunday night – and before Peaky Blinders has any chance to distract us, Mark races through the Cheltenham programme in the company of some very special guests indeed.

Four great days, 28 races, a raft of offers from Betfred, equine superstars by the wagonload, brave jocks, and crucially this year, adoring fans. In person. On hand. Get in!

Top Irish amateur Jamie Codd, he of ten Festival winners and counting, sung the praises of the darling of all Ireland, Honeysuckle, from a car park somewhere near you.

She’s universally admired of course. Mark Pearson then described the opening Supreme Novices’ Hurdle as ‘an absolute cracker.’ Oh yes, and then some.

Constitution Hill? Dysart Dynamo? Jonbon? Maybe you’ve got your own fancy, but as curtain-raisers go, what a race we have in prospect. Tom Lee, looking forward to the return of those crowds – ‘it will be Cheltenham on steroids.’

Former Love Island resident Frankie Foster made a welcome appearance, the first of several planned for the week. Only member of the squad wearing a tie. Deeply impressive. Tanned. Handsome. I remember it well ….

DJ Joel Ross meanwhile tells us one of his strongest fancies of the week runs in the ultra-competitive Coral Cup. Tune in to find out where his cash is going, and for the latest on Richard Patrick. Don’t ask.

Our man Rupert Bell reported from the track in what appeared to be a force-nine, and was so excited I thought at one point he was going to have to have a lie-down. Bless.

We had a wonderful, nostalgic look back at some VT of old Gold Cup heroes too, and Matt Hulmes coined what for me was the quote of the night in giving his selection for Friday’s pivotal race of the entire meeting.

“Two words; Gal … vin.” Another with a severe case of Cheltenham Fever, evidently. The fragrant Emma Lavelle spoke warmly about her widely-admired Stayers’ Hurdle hero Paisley Park (pictured above), and there was a lot of chatter concerning the Champion Bumper. Facile Vega? Jamie Codd and American Mike? Any one of several, fabulous dark horses?

Talking of which, Tom Lee gave a strong mention not once but twice to an Irish raider he STRONGLY fancies for the Stayers – reckon if it obliges we’ll never hear the last of it.

Tell you what – it’s all right here, so get the kettle on if you didn’t catch it ‘live,’ and take it all in. The offers discussed might have gone – check on betfred.com and social media – but the great news is that similar, fearless little presents will be available, courtesy of Fred, all week long.

Personally, I’ll see you Tuesday morning with my scribbling colleagues, for some audio tips and a daily live blog running throughout the week.

Take care, and have a wonderful Cheltenham.