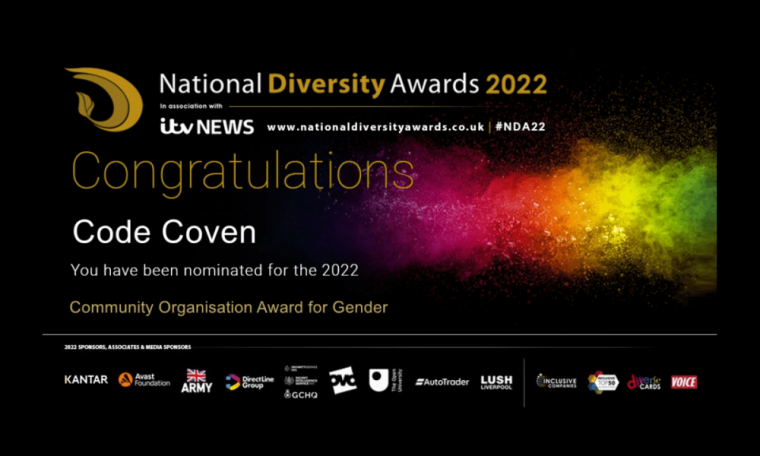 Code Coven, the first award-winning accelerator for marginalised game developers, has been nominated for the Community Organisation Award for Gender at The National Diversity Awards 2022.

Britain’s most inspirational and selfless people will come together to honour the rich tapestry of our nation, recognising individuals and groups from grassroots communities. The prestigious black-tie event recognises nominees in their respective fields of diversity including age, disability, gender, race, faith, religion, and sexual orientation.

Tara Mustapha, CEO & Founder of Code Coven says “I’ve borne witness to non-men having to prove their ‘gamer credentials’ to be in the room, being passed over for jobs and promotions even though they are more qualified than their cis male counterparts, being paid less than them too, being tokenised at gaming events, and not given the investment in their self-development or in their own companies. So what drives me, is simple – what would this look like if it were easy?

I have never felt so fulfilled, so delighted – it brings me such joy to start seeing people be able to realise themselves and their own capacity. For me, it’s that I can see such talent and possibility – and to see people be able to see that in themselves is breathtaking.”

Code Coven’s prestige is being recognised across multiple categories. Submit your votes and join the 60,000 votes received annually by the National Diversity Awards:

Since their pilot course in 2019, Code Coven has empowered people of marginalised genders from over 35 countries around the world with subsidised education, tailor-matched mentorship with industry leaders, and a genuinely supportive community who uplift each other.

Voting is now open and closes Friday 20th  May  2022 – so don’t miss out on your chance to get involved!