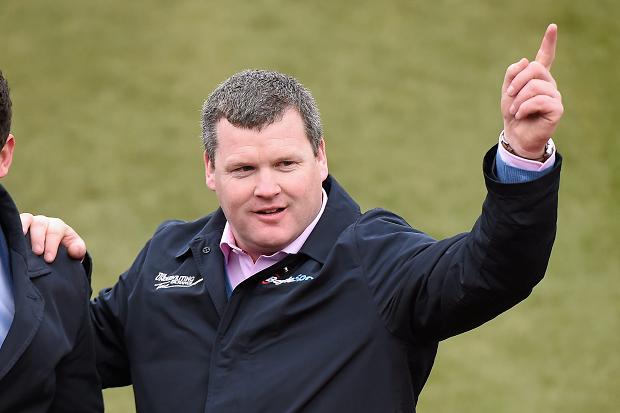 Gordon Elliott admitted he nearly opted against entering surprise winner Conflated into Saturday’s Grade 1 Irish Gold Cup after he shocked the likes of Minella Indo, Asterion Forlonge and Kemboy to win the feature race on the first day of the Dublin Racing Festival at Leopardstown.

The 18/1 shot finished ahead of Minella Indo, while Janidil was third, and Elliott admitted afterwards he was grateful for the backing of Gigginstown Stud pair Michael and Eddie O’Leary, who helped persuade him to go for Irish Gold Cup glory instead of a much-less prestigious handicap in the week.

He said: “I was keen to run him during the week and we were thinking of running him in a handicap. Thankfully Eddie and Michael [O’Leary] let me run him in this.

“I wanted to know where I was going with him and how good he is. I know he has a massive engine but he can be hot and cold. It’s great for Michael and Anita, the whole team at Gigginstown.”

The Cheltenham Gold Cup or the Ryanair Chase in the March showpiece meeting now appear to be Conflated’s options after his stunning victory. Betfred make Elliott’s charge 8/1 to win the Ryanair, while he is 10/1 for Gold Cup glory.

Earlier at Leopardstown, in the Irish Arkle, Blue Lord won a frantic race for Willie Mullins, who enjoyed a fantastic day as the trainer won the first three Grade 1 races of the day and the last to pick up four victories on Saturday overall.

After Haut En Couleurs had fallen early on, Saint Sam emerged as the leader in the Irish Arkle before Riviere D’etel came to the fore only for Blue Lord to power through late on for victory.

Meanwhile, Vauban is now the early favourite at 9/4 for the Triumph Hurdle at Cheltenham after a comfortable win in the Grade 1 Spring Juvenile Hurdle.

The Rich Ricci-owned horse moved clear of the fancied Fil Dor (5/1 – Triumph Hurdle) on just his second hurdles start but looked every inch a classy Cheltenham performer with a three-length success. Il Etait Temps was third, ahead of The Tide Turns in fourth.

Afterwards Ricci said there’s only more improvement to come from the four-year-old, with The Festival in his sights. He said: “I was hoping he’d come on and there’s more to come, I think. That was very impressive for a four-year-old.”