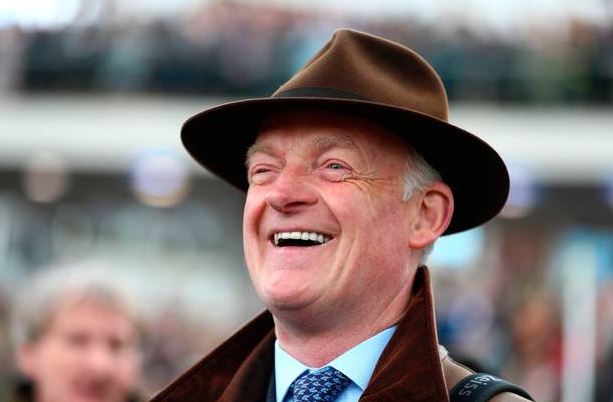 Gaelic Warrior is yet to even see a racecourse on these shores since being bought by Rich Ricci and sent to Willie Mullins from France, but he’s as short as 4/1f for the Boodles Juvenile Handicap Hurdle.

It’s undoubtedly the gamble of the Cheltenham Festival so far. He’s been extremely well-backed over the last month or two after he was given a generous-looking UK mark of 129 and subject to rave reviews from Clossuton, and I’ve been told by our traders that he would be one of our biggest losers of the week.

So when Mullins said this about the four-year-old in his latest stable tour, we took notice.

“He’s a really interesting horse,” said Ireland’s champion trainer. “His form in France is good and he has done some very good work since joining us.

“When we saw his handicap mark, we decided to aim him straight for the Boodles Juvenile Handicap Hurdle. He has jumped plenty of Irish-style hurdles here and we are very pleased with him.”

The 65-year-old also delivered a huge update on arguably the most exciting novice chaser in training, Galopin Des Champs. Backers for the Brown Advisory, look away now…

He said: “He’s in the Turners and the Brown Advisory. He could go in either and I will chat to Paul before making a final decision, but I’d be happy to go for the Turners and that’s what I’m favouring at the minute.

“I think the way to do it is to look at the best race for the horse rather than the calibre of the opponent and I’m thinking our man may be better off over that trip.”

It looks like a mouth-watering clash between Galopin Des Champs (EVS), Bob Olinger and L’Homme Presse is on the cards in just three weeks’ time.

On Chacun Pour Soi – a 9/2 shot for the Champion Chase – Mullins was rather bullish:

“I think the world of Chacun Pour Soi. A lot of people are saying he’s not able to face the hill at Cheltenham but I’d like to see him get a fair crack of the whip over there. Maybe he’s a horse who runs best fresh.

The Clossuton maestro admits Energumene (11/4 for the Champion Chase) “isn’t far off” Shishkin’s level, but admitted “it will be hard to turn that form [of the Clarence House] around”.

Unsurprisingly, Mullins nominated 4/5 Ryanair favourite Allaho, who was arguably the most impressive winner at last year’s Festival, as his banker of the week.

He said: “He’s in great shape. He’d be the first one that comes to mind for me as the banker for us and I’d be very disappointed if he doesn’t run a really good race.”

Appreciate It, a 4/1 shot for the Champion Hurdle against the phenomenal Honeysuckle, is going straight to Prestbury Park without a run – and Mullins doesn’t think that will be an issue for the tearaway Supreme winner.

“I sent him away for a gallop last week and I was very pleased with him. He galloped very well,” he said.

“I think we have a good record when we bring horses to Cheltenham without a previous run, with Quevega being the obvious one. The lack of a run isn’t something that will worry me with him.

“It will be a big challenge for any horse to take on Honeysuckle, she’s a real machine and Rachael can put her wherever she wants.”

Dual Gold Cup winner Al Boum Photo, King George victor Tornado Flyer and the talented but quirky Asterion Forlonge are all on track for the Blue Riband on the Friday.

Meanwhile, he wouldn’t commit to targets but Mullins confirmed that exciting novice hurdlers Sir Gerhard, Dysart Dynamo and El Fabiolo are fit and well and on track to contest either the Supreme or the Ballymore – while last year’s Champion Bumper runner-up Kilcruit will definitely run in the Supreme.

For updates on the entire Mullins battalion – including Triumph and National Hunt Chase favourites Vauban and Statler, Blue Lord, Facile Vega and many more – click here.