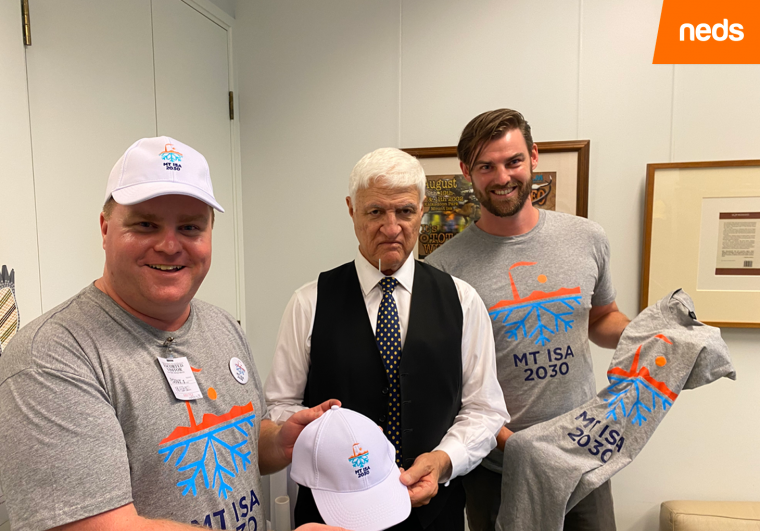 MOUNT ISA’s bid to host the 2030 Winter Games has received a major boost with Bob Katter giving his full support.

Katter, whose federal electorate of Kennedy includes Mt Isa met with the bid committee consisting of Dylan Katter (no relation) and future x4 time 2030 gold medallist, Jack Rafter at Parliament House in Canberra during the week.’

In a hastily organised press conference in his parliamentary office, Katter declared it was game on for the Mt Isa 2030 bid “I am here to announce the bid for the 2030 Winter Games in Mt Isa.”

The bid committee showed Mr. Katter a presentation of where the venues will be for the games, including the elite training faculties, international broadcast centre, and athletes village.

Despite criticism from outside parties that Mt Isa doesn’t have any winter weather, Katter was adamant that the town was ready to host the Winter Games in eight years’ time. “I mean go to India. Go to Africa. There’s snow in the mountains and they’re extremely hot countries. I can take you out the ranges, Mount Remarkable. Do you know the steep slopes? It’s white at the top. Absolute proof that there’s ice there.”

Katter has a long history of being involved with Winter Sports, with his great-grandad being one of the early pioneers of Bobsled in the sports formative years.

“Yeah, I get a bit self-conscious with Bobsled. You know it’s named after my great-granddad?” The Katter family are pioneers in Bobsled

The organizers have also confirmed that Mr. Katter will declare the games officially open at the opening ceremony in 2030 at the Rodeo Grounds as head of state.

With a federal election approaching, there’s every chance Bob Katter will have the balance of power in the event of a hung parliament for which Mount Isa 2030 will be part of the terms for either Scott Morrison or Anthony Albanese to form a minority government.

The IOC will announce the bid for the 2030 host of the Winter Games in the next year, with the official partner of the Mt Isa bid NEDS offering $1001 they will be successful, despite the committee claiming they are $1.01