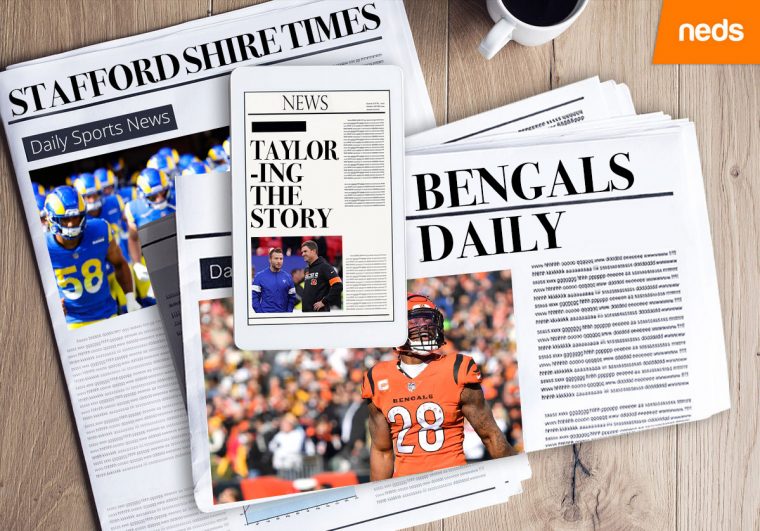 There is no shortage of stories around any Super Bowl, especially one with two teams full of unique characters, history and overall talent.

It’s just a question of what will happen before, during and after the big game that will grab our attention.

We’ve taken a guess as to what headlines will be adorning the front the remaining newspapers that cover the game and their websites.

It feels almost like a certainty, the Rams have been playing out of SoFi Stadium for the past two seasons, but for Super Bowl LVI they are designated as the visiting team.

Each year the home team alternates between the NFC and AFC champion and this year it just happened to be an AFC year so the Rams bench will be on the opposite side to what they are used to.

Someone running to the wrong sideline out of the tunnel has happened before.

After 12 long years, Detroit and Matthew Stafford parted ways last January, but maintaining a dignified poise, many Lions fans swear they are happy for their former signal caller.

He took the Lions to the playoffs three times but never won a postseason game.

Quick turnarounds in the NFL are becoming increasingly common but given the fortunes of the Lions franchise, seeing Stafford and Eminem involved with Super Bowl LVI is as close as they are going to get to the big game for a while yet.

One of the issues that has plagued Stafford throughout his career is his occasionally erratic play.

Overly hyped up early in the game, we’re expecting Frank in Row C, who is wearing a Cooper Kupp jersey to be the target of the game’s first third down throw.

Guess it’s better than throwing it to a Bengals defender though.

That endzone view of the first Matthew Stafford interception shows how ridiculous that pass really was. pic.twitter.com/wRqcLMxfq5

Known for his ultra-cool demeanour and smoking cigars after big victories, Burrow is fast establishing his brand in the NFL.

Joe Burrow’s Bengals make it to the Super Bowl in his second season 💨 pic.twitter.com/NlVQ9lmXqB

Perhaps the young quarterback might get a slightly ahead of himself and light up a victory cigar a la Red Auerbach during warm ups.

Given that SoFi Stadium is a non-smoking venue, that will probably draw the ire of the security and he’ll have to actually play the game before going on his victory lap.

Tom Brady Just Shows Up Out of Habit

The recently retired great was apparently seen getting into an argument at the player’s entrance, appearing confused when someone explained that his team didn’t make it this year.

Some passers by allege he said “you’ll be sorry when I’m back here with the Raiders next year” seemingly forgetting that Super Bowl LVII is in Arizona.

Given he made 10 Super Bowls over the course of 21 seasons as a starter, it’s reasonable to understand why he just assumed he was going to be playing in this game.

Tom Brady Hints At A Comeback Less Than A Week After Retiring https://t.co/lJ3PaP3OSk pic.twitter.com/lF8OdM38tC

Ben Simmons Asks for Trade to Either Team

He finally got out of Philadelphia, but it turns out Brooklyn isn’t that great of a place to be either.

Something about Kyrie asking if he has considered the possibility that the basketball, like the earth is flat?

After only a few hours on his new team, Simmons is already eyeing off the next jersey to add to his collection.

Noted bandwagon hopper LeBron is facing a real dilemma heading into this game.

Current member of the LA Lakers, he’s kind of obligated to go for the Rams but being an Ohio native he might claim the Bengals as one of his 432 teams.

After the game he’ll either tweet something about “good for Stafford” or “Ohio represent”, unofficial odds of that happening are $1.01.

LeBron James jumps on the Bengals bandwagon with Cincinnati heading to the Super Bowl.https://t.co/kqPUvT4phP

Lions-49ers will have @KingJames in the crowd. Will LeBron be the latest to jump on the Lions’ bandwagon? http://t.co/wOz5ihII

Cowboys fans are trying to find new teams for the rest of this season https://t.co/x26sn3n0q8